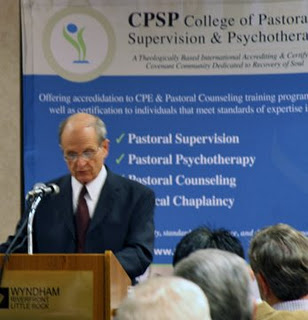 At this Thanksgiving season we in CPSP have much to be thankful for. We are prospering as a community both in this country and overseas. We have come into our own as a significant community among the many communities that promote clinical pastoral work.


We are also approaching November 30, the first anniversary of the Mediation Agreement signed by the ACPE and CPSP, signed appropriately enough in Philadelphia. This agreement put an end to two decades of animosity that was subverting the high goals of both communities.

We are grateful especially to leaders of the Religious Endorsing Bodies without whom this agreement might ever have come to fruition. We are grateful, and we look forward to a deepening sense of collegiality between the two communities.

The members of the CPSP Mediation Team who, with our ACPE colleagues brought this agreement to pass, are Jim Gebhart, Perry Miller, George Hankins-Hull, and me.

In February a subcommittee was appointed to undertake the detailed discussions with our ACPE colleagues as they implemented the Agreement. This sub-committee has had one face to face meeting and numerous phone meetings. Jim Gebhart chairs this committee, which includes Annari Griesel and John deVelder. They have addressed and are continuing to address several complaints that have been presented from our side to ACPE of possible violations of the Mediation Agreement.

We have every hope that this dialogue group will continue its work in the positive and cooperative spirit in which it began.

We believe we are entering a new era in which the ACPE and CPSP will be more fully colleagues in our common work. And for that anticipation we can all be very thankful.

Given our progress together we are thankful that we seem to have entered a new era of mutual collegiality as becomes our common calling.

I wish you all a blessed Thanksgiving.